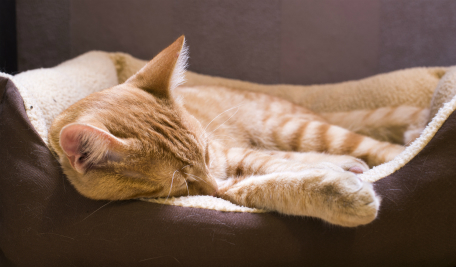 As a cat owner, I am no stranger to cat litter box odor. Controlling it can be a struggle, especially if you live in a small apartment like I do. Luckily, I have found some simple ways on how control cat litter box odor once and for all.

1. When I realized the odor from my cat’s litter box was getting a little out of control, I first took a look at the litter itself. I was using a fairly cheap brand that didn’t clump well, but fell apart when I tried removing it. Once I switched to a clay-based clumping litter, I realized the odor diminished slightly. Clumping litters also help you remove waste more cleanly, leaving nothing behind.

2. I witnessed my mom cleaning a carpet one day and noticed she used a sprinkling of baking soda to help suppress odor. After some research, I found that the same principle can be applied to litter box odor. Baking soda is natural, absorbs moisture, and helps control litter box odor easily.

3. When I first noticed the odors, I tried using air fresheners to beat the smell. I quickly found that the flowery tropical scent just sat on top of the odor and did nothing to neutralize it.

4. I had originally placed the litter box under a small table with a cloth covering so it would be hidden from view. I hoped that the odor would also be trapped beneath the cloth. I found opposite happened. Every time I went to empty the box, the smell had concentrated and became stronger than ever. I soon found keeping the box in a well-ventilated area did a better job at curbing strong odor.

5. Despite all my solutions to litter box odor, there was still one hurdle left: in order for all of these things to work, I had to empty my litter box pretty much every single day. Otherwise, the build up of odor was impossible. This meant a lot of trips outdoors (even in the heavy rain) and a lot of plastic garbage bags wasted. I finally found the end-all-be-all solution to my cat litter odor problems.

Having a Litter Champ means I can control litter box odor at every stage of the process. It allows me to empty the litter box daily and keep odors under control in multiple ways. Unlike plastic garbage bags, the Litter Champ has a triple-seal lid, so no odors or bacteria can escape.

The large canister can hold more waste than your typical plastic grocery bag. This means I can empty the box daily without making frequent trips to the dumpster. The step-and-drop design means I don’t have to accidentally touch anything I don’t want to when emptying the litter box. Finally, the scented liners are included and securely hold any odors in for good.

My efforts to control my cat’s litter box odor has been made that much easier by the Litter Champ.