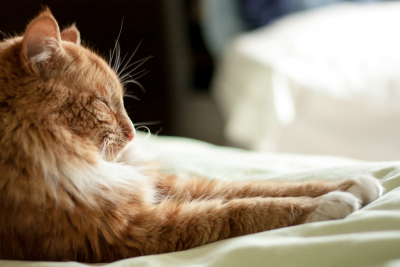 In addition to being adorable, cats are relatively low maintenance and self sufficient when compared to other domestic pets. If you can keep their litter box clean and ensure sufficient food and water is available, your cat will be happy staying home alone for long periods of time during the day and even overnight. Speaking of low maintenance, cats even clean themselves. No need to drop your cat in the bathtub unless you have a fetish for claw marks—because they will vehemently remind you that they don’t need to be bathed!

Providing that you don’t dunk them in a bathtub, cats can be very loyal and affectionate to their owners. And if you keep your cat inside, they’ll return the favor by not tracking dirt inside the house.

But, in spite of their otherwise clean nature, there is one inevitable and dirty aspect to owning indoor cats: kitty litter and their waste. While most people don’t want to be assigned to litter box duty, nobody wants to deal with the odor of an unattended litter box.

The bad news is that cats poop and pee inside your house. The good news is that cats instinctively want to poop in a litter box so there is very little training required. That’s where your cat litter disposal system comes into play.

With a few modern tools you can avoid the household odor that is sometimes associated with having litter boxes in your home. Try using a clumping litter that is commonly found in pet stores and supermarkets so that the soiled litter separates itself from the clean litter. This seals in some of the odor until it is scooped and reduces the amount of litter you need to buy.

Placing a cat litter disposal system like the Lucky Champ near your litter will also simplify the process. As urine and solid waste begin to decompose, the odor released dramatically magnifies, making it important to scoop regularly.

A good cat litter disposal system will include a long-handled scoop to prevent the need of getting low to the litter box, and then instantly seal the waste without the need for a trip to the outside dumpster.

Each time you scoop your cat’s litter boxes using a disposal system, you are replacing the use of a wasteful plastic bag with an easy scoop into the Litter Champ and sealing the odor and waste inside with the turn of a knob. Conveniently decide when you are ready to transport the waste to an outdoor receptacle without worrying about odor, cleanliness or safety. Less bending over, less walking, less non decomposable waste, and less odor!

Invest in the Lucky Champ cat litter disposal system and take the dirty work out of having a cat!